The Night of the Accordion Murders. Vol. l 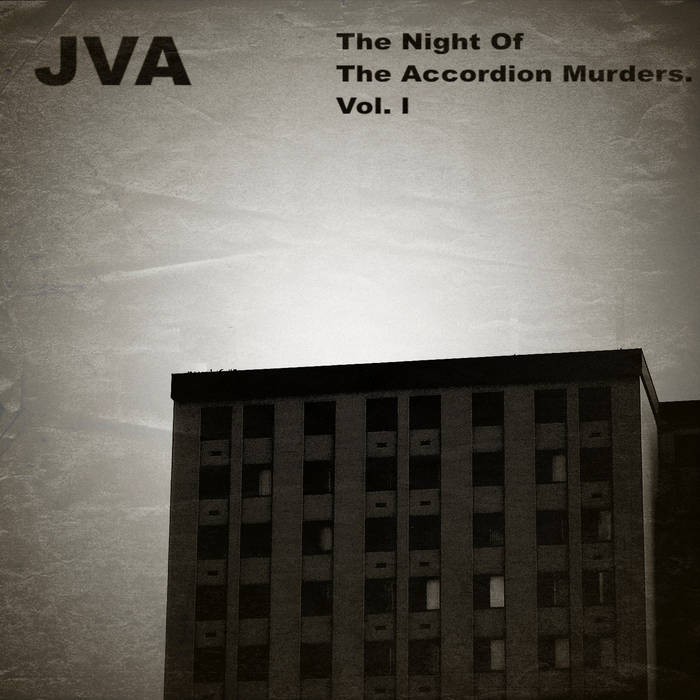 So this is it, eh?
This is what you've got for me, huh, God? The short stick. Thanks a heap, mighty big of You.
After all we've been through.
I tried to do things Your way. I tried. You know I tried. It just didn't take.
I hate to point fingers, old man, but the way I see it, this is all Your fault.
This whole lousy life wasted.
Rotten childhood, miserable life as a grown man (a grown man, now there's a laugh), and now this…the corker! This! Dying like a chump here in this stinking fleabag apartment (what a dump) with no one, and nothing…
Your fault.
The blood's coming up more regular now every time I cough, but the hospital's out. I'd get pinched there for sure. Better just to wait this thing out and see what happens, me and this crummy bottle.
I'm not holding out much hope.
Who was that fruity poet? Rage, rage…against what? There's never been a fuckin' thing.

Mrs. Walters stood in Tawno's bedroom (well, the bedroom that WAS Tawno's before he shuffled off to Buffalo) reading his last words.
Something inside her, hammered in deep since childhood, knew damn well it was wrong to be reading someone else's diary, but hey - dead's dead and the live ones still need some entertainment. She smiled at that thought, and read on.
The air was dusty, heavy in the hot room. Mrs. Walters large belly rose and fell, shuddering with her breathing. She clamped down on the cigarette between her teeth, squinting in the smoke as she read. Ash dropped onto the pages of the book. She brushed it away.

Mrs. Walters turned her head to the voice, keeping her eyes on the book.
"Huh?" said Mrs. Walters.

"I said we're about done here, Mrs. Walters…looks like we've got everything."

Mrs. Walters pulled her attention from the diary and regarded the voice.
"Yep, that's fine." she said.

"There wasn't too much to pick up, but we appreciate you calling us. Every little bit helps, ma'am."
Nelson, the Salvation Army volunteer, took off one work glove and extended his hand. Mrs. Walters took it.

"No, not short…PLENTY short…a midget, or dwarf, or whatever. He was only about THAT big…no shit" she said.

"And a sonofabitch, t'boot! Real mean little bastard." she said dropping her cigarette, and grinding it out on the wood floor with her sneaker.

"No one could talk to him. You couldn't talk to him at all…little asshole." she said.

"Hmmm, that's too bad, ma'am. Too bad indeed." he said.
There was a silence in the room that was four seconds long, but felt much longer.

"Well, I'm going to go then. We sure appreciate your donation." he said.

"Well, he didn't have any family or any friends that I know of, so what was I gonna do, have a fire sale? I called you." she said.

"You want me to take that too?" he said.

Mrs. Walters shook her head.
"Nope…I think I'm gonna hang onto this. I could use a laugh. That little twerp was a nut job! Talking to God and all that hooey." she said, shaking the book.

"Thanks, Nelson. Oh, and if you know anybody who's looking for an apartment, we've got a vacancy!! Ha ha!!" she cackled.

She stood in the empty room, and listened to Nelson walk down the three flights of wooden steps. She waited until she heard his van start up and drive away.
She sat down on a dead man's bed, lit another cigarette, and turned her attention back to the book.

Moving now. Floating. Slipping through the dark rooms and halls. I take back everything I said, God. This Death thing? Now THIS is livin'. Oh, don't get me wrong, I was pissed at You at first. Just pissed to be dead. Who wouldn't be? The idea's unpleasant. And though I'm still not sure what all you got in mind for me here, I'm sure enjoying the hell out of it. I'm loose as a goose. I ain't got no BODY, and no BODY'S got me! That short, decrepit, ugly, little body? Well, that's all over with, Charlie. For the first time in my short (ha ha) life, I'm free. I'm an ether man now. Lighter than air. Passing through walls and windows and ceiling beams. Hey, I think I'll go back and check out that stacked, red-headed broad in 507 again. You seen that lately, Big Man? Ouch! Nice work! Woah, Boss! Ain't this the life?

The telephone was ringing.
The Price Is Right was blaring.
Mrs. Walters was glaring.

She'd just eased her girth onto the sofa, and had settled in to watch the show. She held a cool glass of 7-Up in her left hand, a Pall Mall Gold in her right. She let out a frustrated "Ohhhh…"
Grunting, she pushed herself from the sofa and picked up the phone.
"Yeah? What is it?" she said.

"Oh, hello, Mrs. Walters. It's Nelson. From the Salvation Army? I hope I'm not disturbing you, ma'am." he said.

"Again, I am sorry. It's just something you said the other day…about a vacancy in your building? he said.

"Yeah, the painters just finished up in there this morning. It's like new. What, do you want it?" she said.

"Actually no, it wouldn't be for me. It would be for my mother, bless her heart." He said.