The Night Of The Accordion Murders. Vol​.​2 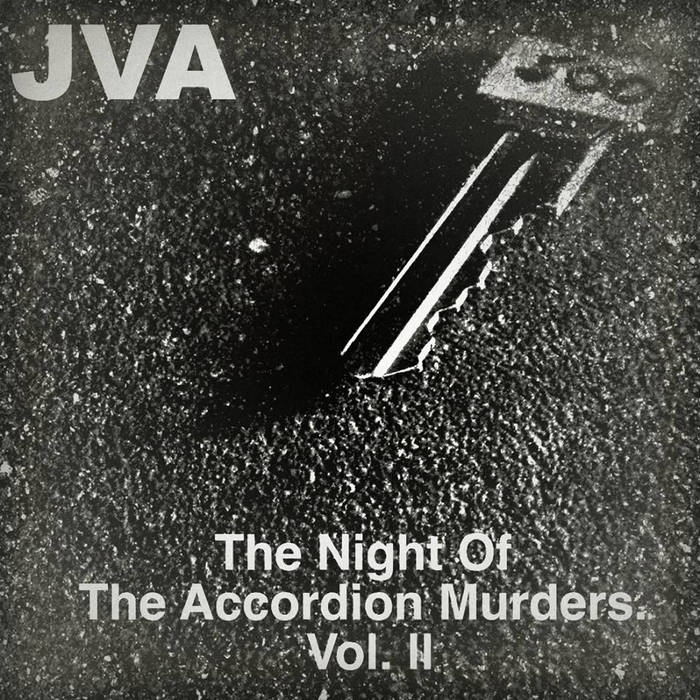 Released in 2015.
Produced, recorded and mixed by me.

She’d stopped cold at the threshold.
The keychain dangled in the lock. Room 500.
The apartment door was open, the smell of new paint wafting out into the hallway where the three of them stood.
Mrs. Walters and Nelson—just a step behind Nelson’s mother—exchanged a look.

“Mama?” said Nelson to his mother’s back.

On a radio, behind a door down the hall, Bob Seger was trying to convince someone that they had tonight.

He reached out for his mother’s shoulder.

She shifted her cane to her left hand and raised her right palm toward the ceiling. A truck rumbled by out on the street.

Nelson’s mother dropped her hand down to her side and spun around to face them. Her eyes were a serious business. She jerked her thumb at the apartment door.

“I ain’t livin’ in THERE. Oh, HELL no! Not in THAT room. Not in THAT mess,” Nelson’s mother said.
Hobbling on her cane and muttering, she elbowed past them toward the elevator.

“There’s a pesky little fellow’s still in there…” she said, pushing the button for the ground floor.

“Moving room to room, slipping through wood and floating through walls, seeing all there is to see. And believe you, me, there’s a world to see. I see you. Whenever I please. I watch you in your mirror. I see you. Everything. I see you when you’re sleeping and all that bit. In the shower. I’m there. I’m there when you get up to the Devil’s business too—front row center, watching all the action, pretty pretty. Fly on the wall. Invisible man. A gas, ladies and germs…it’s a gas…”

The recently deceased Tawno Biggs couldn’t have been happier with his current arrangement. He zipped merrily up and down the halls, through the rooms, all day, all night.
His most favorite place in the building though was room 507, that redhead’s room on the top floor near his old one.
He entered when he pleased and stayed as long as he liked. Watching.
He watched a lot.
He watched the redhead eat and watch tv. He watched her dress and undress. He liked that. He watched.
Watching was just fine…for now.
Sure, a bit later he’d begin to Desire. To Wish. And to Want. Want Her. More Her. Want More Her. And then, well, then the whole thing would go completely sideways.
But that was still down the road apiece.

The next morning he flitted to the ground floor and watched the redhead talk to the old hag landlady.

Mrs. Walters leaned up against the frame of her apartment doorway, listening…listening to Miss Big Tits who was standing in the hallway outside Mrs. Walter’s room going on and on about something. Again.

“It’s just…the strangest thing, Mrs. Walters. I know it sounds silly, I guess. But lately I don’t feel…completely comfortable in the apartment.”

Oh boy, thought Mrs. Walters. Everything had to be JUST SO with Miss Big Tits, didn’t it? What was it with these big-titted women? They always wanted their big-titty way. And they always seemed to get it.

“You don’t say…” Mrs. Walters said with a definite lack of enthusiasm. She thought of the world’s smallest violin.

“It’s like…it’s like, like something’s crawling on my skin when I’m in that room, I can’t explain it.” She visibly shuddered.

“Wait. Whaddya mean, crawling on you? Like bugs? I just had the whole damn place fumigated a few months ago. You don’t hear anyone else complaining, do ya, Mi..Jennifer?” said Mrs. Walters.

“No, not bugs. Nothing like that. It’s like…no matter how many showers I take, I always feel…unclean in that apartment.”

Mrs Walters squinted up her face like she was tasting grapefruit.

“Unclean? Hey, this building’s spic and span, hon. I see to it! Unclean? Well, heh, that just might have to be on you,” Mrs. Walters snorted.

Jennifer sighed. She had been nice. Courteous, polite. But that last snide comment was the end of that.

“I want to change apartments…”

And here it was.

“Change apartments, whu…? Come on, darlin’, use your noodle! You’re making way too much outta this,” said Mrs. Walters.

“No. No, I’m not. I think…I want…to change apartments. Definitely.”

“Fine,” Mrs. Walters said, rolling her eyes. “But I only have the two open now since the ol’ colored gal ended up taking that one…” Mrs Walters pointed down the hall.

Jennifer looked over her shoulder into the darkness then back at Mrs. Walters.

Jennifer seemed to be doing a math problem in her head. Then she nodded.

Nelson’s mother sat on her bed, listening to them talking down the hall.
She could hear everything through the thin walls. Every word.
And listening, her blood began to race. Because she knew exactly what that redheaded white girl was talking about. The bugs? The dirty feeling? That was part of the something else. Part of the something that wasn’t right around here.

She’d felt (seen) him that first day she’d been brought to the building when the horrible landlady had handed her the key (500). When she touched it she got a small shock, and then that key started to tingle in her hand. It made the bones in her finger and thumb vibrate. And when she put it into the lock, that key got hot. So hot she almost dropped it.

She saw him in her mind, even before the door creaked opened.
And then the door WAS open. And there he was.
He was standing (floating?) right there: a little man in an old tuxedo, bald-headed, huge bulging eyes, crazy smile a mile wide. He was clapping his hands with joy. Then he faded away like dust in the sunlight. She saw him for just a moment, but that was enough. Enough for her to know to get the devil out of Dodge.

A few minutes later she was down the elevator and outside into the safe light of day. She sat on the wall with Nelson and he tried to comfort her; he was such a good boy.

His mother stared up at the top of a tree in the front yard.

Nelson wasn’t sure exactly what had happened to his mother when that apartment door opened. She hadn’t volunteered an explanation, and he knew enough not to ask for one. All he knew was that whatever happened, it wasn’t good.
That look on her face when she’d mentioned a ‘pesky little fellow’…
That same look had been giving him the gooseflesh since he was four years old.

“We’ll just have to keep our eyes open, that’s all, and find you something else. Or…you know what? We’ll move you in with us. How would that be?” Nelson said.

He held her hands in his. They were cold despite the summer.

His mother felt things. And saw things. Things nobody else could feel, things nobody else could see, like she was tuned into a strange channel. Not always. Sometimes there’d be a normal spell where nothing happened. But then, something would. And even though he was used to it by now, it still scared him. And he still felt afraid for her. Nelson always counted his blessings that HE never felt or saw those things. That was a weight he was sure he couldn’t carry.

Nelson’s mother sat under the warm sun and closed her eyes. She leaned forward on her cane.

“Naw, naw. I ain’t going to put you and your family out, and that’s the end of that talk. Thank you, son,” Nelson’s mother said.

“You’re not putting no one o…” Nelson started.

“Enough…” she said, opening her eyes.
She stabbed the air with her finger for emphasis.

“I just had me a moment up there. Thought I saw something. But, no…just my old eyes joking me again…”

Nelson started to say something, stopped, and scratched his collarbone instead.

Nelson drummed his fingers on the wall. His mother took in a deep breath.

“But…one thing. I don’t like that room too good. It’s too…high up for me. If that old elevator should break down, God forbid, I know I can’t walk all them stairs! But, you ask that lady if she’s got something on a low floor and I’ll…I’ll take another look,” she said.

“And that’s that.” she said, tapping her cane once on the cement.

Nelson side-eyed her and raised his brows. He shook his head. “Alright, mama,” he said.

He was defeated. And very, very curious about his mother’s sudden change of heart.

And he had every reason to be.

Because after she’d come down the elevator scared to death, she caught her breath and waited until her heart had stopped beating so fast. Then she came up with…quite a plan.

If you’re listening to this record, and reading this - thank you.