The Night Of The Accordion Murd3rs 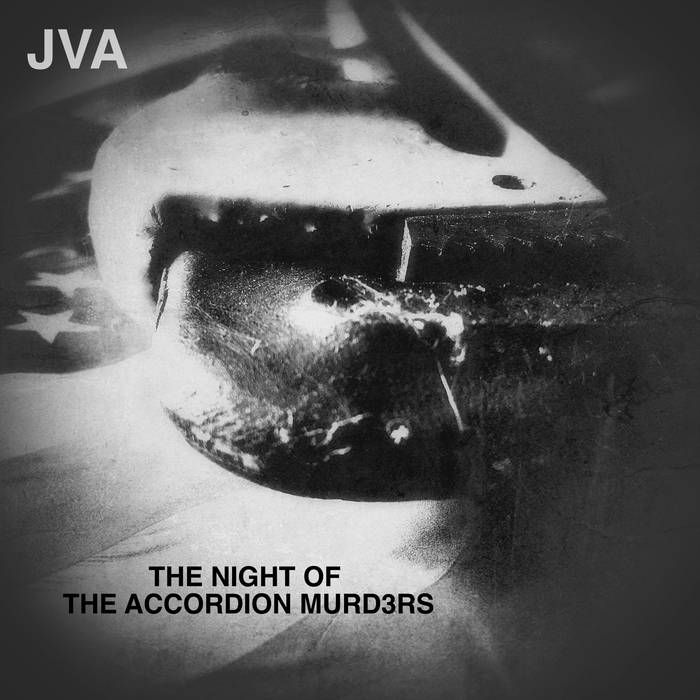 Frank and Mirela Biggs are about to start something that no one can stop.
It’s going to get messy.
---

Jack Biggs was too busy handing out cigars to hear the rest of the doctor’s sentence…
“A boy? Holy smokes! The doc says it’s a boy, fellas!!” said Jack, shaking hands with the other expectant fathers in the waiting room.
“Mr. Biggs?” said Doctor Kestenbaum.
“I’m a Pop, a POP! Well, howdya like them apples? Have a cigar!” said Jack.
“Mr. Bi…” said Kestenbaum.
“…Yippee!!” hollered Jack, his hand cupped to his mouth.
It echoed down the long hospital corridor.
“Shhhhh!” shushed a passing nurse.
“I feel like a million buc…”
“MR. BIGGS!!” shouted Doctor Kestenbaum.
That got Jack’s attention. He turned toward the doctor.
“Oh…yeah. Sorry, Doc…I got a little carried away there. Cigar?” said Jack.
Kestenbaum stared at him. Then he looked at the floor.
“Doc…what is it?” said Jack.

Complications was what is was. Despite all their best efforts, the doctors just couldn’t stop Mirela’s bleeding. She was still alive, but just barely.
Kestenbaum needed Jack to go to her side, comfort her, and say his goodbyes.
A ripcord tore open the center of Jack’s chest and everything, everything, spilled out onto the tile.

Jack and Mirela met in Rome. Not quite as romantic as it sounds. It was at the end of the Big War. It was hell on earth.
Jack’s platoon had bivouacked on the north side of town near the Villa Borghese. They were helping out where they could; cleaning up, maintaining a command presence, making sure that everybody had something to eat, and so forth.
Everything was broken and filthy, and it was going to take time, know-how, and elbow grease to square it.
One June afternoon Jack had been tinkering with a busted-down tank, trying without much luck to unbend a bent gun travel lock. He’d given up for the moment and was wiping sweat off his neck when saw an English squadron on foot coming toward him. They were slowly dragging themselves down the road. About a hundred of them. They looked beat.
In tow they had a small group; eight shabby, frightened people, each carrying with them what looked like all their worldly belongings.
“Well, well…look what the cat dragged in! Whattya got there, Redcoat?” Jack asked with a half grin.
“Load a’ Romanians…picked ‘em up on the coast near Termoli.” said the British soldier. Then he added “…ya jolly John Wayne wanker!”
Every soldier within earshot let out a loud laugh, including Jack. Jack stuffed his bandana into his back pocket and stuck out his hand.
“Jack Biggs.”
“Francis Barnes.”
“Glad to know ya, Frank.”
“Likewise, Jacky boy.”
“So Romanians, ya say? Well, don’t that just beat it?” said Jack.
“Yes, indeed. Refugees. Rowed in on an ‘omemade skiff…” said Francis.
Whew - Jack whistled, pushing his cap to the back of his head.
“Ain’t that something? Running from the Rooskees maybe?” said Jack.
“Dunno. Can’t understand a bloody word they say. ‘Romania’ is all I got. Christ only knows how they got as far as they did. Their boat blew to pieces when it hit land, and there they were on the beach…stuck.” said Francis.
“That’s a helluva thing.” said Jack.
“When we came across ‘em, you shoulda seen their faces, poor bastards. They thought we’d come to kill ‘em.” said Francis.
“Well…you did good, soldier…” said Jack nodding.
“All in a day’s work, mate.” Francis fired an invisible bullet from his finger, winked at Jack, and kept moving down the dusty street.
The Romanians moved slowly along with the soldiers in a tight huddle; blankets, duffels, covered faces.
“Hey, Frank!” yelled Jack. “Make yourself at home! There’s a chow line on the next block! Get yourself something to eat. And make sure these folks get fed too!”
“Much obliged to your Uncle Sam!” Francis waved without turning.
As they shuffled away, one of the refugees turned back to look at Jack. A little wisp of a thing that Jack had assumed was a small boy. But when he saw her eyes, it was no boy. No how.
It was Mirela.
One small look. From those devastating eyes. He couldn’t breathe.
And the kid with the arrow sunk a bullseye straight into Jack’s heart.
You know the rest.

Now here he was; two years and a couple of oceans away from that first look. He held Mirela’s hand. She was white as the hospital linen she lay upon.
“You’re gonna be fine, kid. Trust me.” said Jack.
“I don’t…think…is…telling a truth…” Mirela said, trying to smile.
“We’re gonna get you patched up, back on your feet, and then you and me and our son, we’re gonna go home. Just watch…you watch. We’re gonna live a long, long life together, doll.” Jack said.
“Okay, Jack…” she was breathing harder now.
“That’s the ticket.” Jack said.
“Jack…I…have name for…the boy…”
“Yeah, a name? That’s swell, Mirela…swell. What is it?”
“His name…Tawno…Tawno Biggs…”
Jack arched his brow.
“Tawno? What tree didja pluck that from?” he said.
“Is R…Ro…Romanian.” said Mirela.
She was going.
“Okay…whatever you want, kid. Tawno it is. Sold.” said Jack. “DOCTOR!”
“When I was…little girl…I did a bad…very bad thing…to a lady. She curse…me…and my family. We always…have black luck…ever since…we…we always will…” said Mirela.
Her eyes rolled up into her head.
“Mirela?” Jack said “MIRELA, stay with me!
“She…cursed…us all…” she whispered.
It was the last thing she ever said.

Let me set the scene:
It was several days later.
Back at the apartment, it was just the three of them; Jack, baby Tawno, and the bottle that Jack was pulling from every couple of minutes.
It was 11.40 on a Tuesday night. Outside was one of those pissing Southern California downpours that brings the flowers and all that happy horse shit.
Jack sat in the dark in the tiny living room of the already itsy-bitsy apartment (the apartment that Mirela had decorated with her own sweet hands). He was hammered-drunk, chain-smoking Chesterfields, and staring hard at the crib. Real hard. The pain inside of him was a cold sickening knot that pulsed stronger with every heartbeat.
There was only one word - WHY?
He’d been Jack Biggs…All-American kid.
He’d been Jack Biggs…the decorated Marine.
He’d been Jack Biggs…ol’ good time Jack. Ol’ happygolucky, Jack.
That’s what he’d been. But what was he now?
He was a broken man, a widower, a single father with his life broken into a million tiny pieces.
How was he going to do this on his own? Without her? How was he going to do anything without her?

And the baby…he couldn’t even look at it.

The baby…he had to face it…there was something wrong with…it. Something was very wrong.

When it needed food, he fed it.
When it needed changing, he changed it.
Other than that all he felt was (what was it exactly?)…it was powerful whatever it was. It had taken away the only thing that mattered in Jack’s world. His Mirela.

The wind picked up outside and the rain pounded against the windows.

The baby.
He pulled himself up, out of the chair.
He picked up the bottle. Put it to his lips. Stopped. Put it down again. He staggered across the room toward the crib.
The baby...Tawno (what the hell kind of name is that for a kid in America, for Christ’s sake?)
Jack stopped a couple of feet in front of the crib. He didn’t look inside.
A sound came from the crib. A tiny coo then a revolting gurgle, like squeezing a handful of Jello.

The baby.
The god damned baby.

Jack wanted his life back.
And something began to form (was placed?) in Jack’s mind as he stood there with the rain pounding the street outside.
It was an unpleasant thought. A small dark spot in his mind. Like a black pebble.
He pushed the thought away, and took a step back from the crib. He moved back over to the table, picked up the bottle, and took a long drink.

The black unpleasant spot in his thoughts suddenly came racing back. Only this time it wasn’t just a pebble. It was a black rock. He could see it! He could see it in the hollow of his skull, turning over and over as if on a spit. And it was no longer small, it was a stone the size of a fist.

Plumber’s Wrench - a voice said. The voice sounded like it was right behind him. Jack spun around.
“Who the fuck?”
I said… Plumber’s Wrench.
He shut his eyes and there it was…the stone. The stone was speaking to him.
“Plumber’s wrench?” Jack said.

On the wall in front of Jack, a movie began to play.
There was the hospital. There was the bed. There was Mirela. His beautiful Mirela. She looked fine, in perfect health. She smiled at Jack. She lifted her arm and reached out a closed hand to Jack.
Jack stood there in the living room, his mouth open. He reached out to her.
Mirela opened her hand. Inside was a black stone.
“She…cursed…us all…” Mirela said.
Then Mirela began to scream.
“Mirela!!!” Jack said to the movie on the wall.
Mirela screamed and screamed, the hand with the stone outstretched to Jack.
Jack screamed.
The movie on the wall stopped.
Jack was still screaming.
And now Tawno was screaming from the crib.
Jack stopped screaming.
Tawno kept screaming - a thin reedy sound. Horrible, like a shrieking kazoo.
“Stop!” Jack yelled.
Tawno kept screaming.
“I said STOP!!!” Jack roared.
Tawno screamed louder.

And Jack suddenly understood everything, fully and completely.
Plumber’s wrench…you’re god damned right.
Tawno’s screams filled the building.
(not for long, little sailor)
Jack marched into the kitchen, filled with purpose. He opened the cupboard beneath the sink. There was his toolbox. He snapped open the latches and lifted the lid. There it was, right on top. Easy as pie. He picked up the plumber’s wrench and started toward the living room, toward Tawno, toward the problem.
Because after all, Tawno was the problem.
And Jack, had the solution.
Tawno screamed.

Mirela had always told Jack to be mindful of the small throw rug on the kitchen floor. The one that sat right in front of the refrigerator.
“Jack…watch out on rug…it slip…don’t break neck.” Is what Mirela used to say.
But no one ever broke their neck of course. Not until now anyway.
Jack, wrench in hand, took one final step toward the living room. His right foot touched the throw rug and suddenly he was airborne, falling backwards. The wrench slipped from his fingers and up into the air as he tried to right himself. He hit the hard kitchen floor with his back, immediately followed by his head smacking the linoleum. There was the snap and TOKK of his neck breaking, a sound like someone hit a large ping-pong ball.
Looking up toward the ceiling, Jack noticed something coming at him fast. But he couldn’t move.
The upside of the thing was that he was only paralyzed from the neck down for a second or two.
“But…I was the All-American kid.” Jack thought.
The plumber’s wrench came down - SMACK - right between his eyes, crushing his skull, muddling his brain into a gray paste.